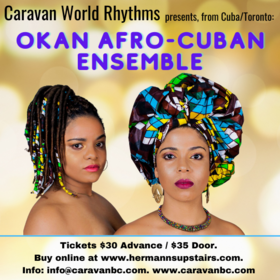 Fri. May 6th 2022 8:00 - 10:00 doors at 7:00 (No Minors)
$30 / $35 door
Sorry, this event is now sold out
Embracing genres that have not historically fostered women artists outside of the role of singer, OKAN co-leaders, composers and multi-instrumentalists Elizabeth Rodriguez and Magdelys Savigne bring a fresh perspective to Latin and world jazz fusion through their powerful harmonies, incredible musicianship and potent lyrical content. They are joined by an all-star band on piano, bass, and drums/percussion.

Having recently worked with Bomba Estereo, Lido Pimienta, Hilario Duran and Telmary Diaz, OKAN has followed up on their Juno and Canadian Folk Music Award-nominated and Independent Music Award-winning debut album Sombras, with their sophomore release Espiral, (Lulaworld Records, 2020) Earning international acclaim from OkayAfrica, NPR and Songlines, Esprial debuted at the number one position on the !Earshot International charts and was included in CBC Music's top 20 and NPR's top 10 Alt Latino's albums of the year.

Called "lush and vibrant, urgent but specific and deeply intentional" by CBC Music, Espiral delves deeper into the group's rich Cuban roots, finding renewed inspiration in this powerful musical heritage. The Santeria influences are most evident in the title track, Espiral, which uniquely blends guajira, the folk genre of Eastern Cuba, with Santeria-derived chants.

Born in Havana, Cuba, Elizabeth Rodriguez is a classically trained violinist who served as concertmaster for Havanas Youth Orchestra. Magdelys Savigne hails from Santiago de Cuba and graduated with honours in orchestral percussion from Havanas University of the Arts. Both are JUNO-nominees for their work with Battle of Santiago and Grammy-nominees for their contributions to Jane Bunnett and Maqueque of which they are former members.

We gratefully acknowledge that this event is taking place on the unceded territories of the Lekwungen-speaking people, including the Songhees, Esquimalt and W̱SÁNEĆ nations.
© 2022 Arts On View Society