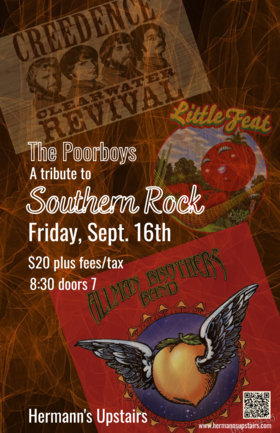 Poorboys: A tribute to Southern Rock

Fri. September 16th 2022 8:30 doors at 7:00 (No Minors)
$20 adv. plus fees/tax $30
The Poor Boys is a Victoria based, swampy rock and blues band that features some of Vancouver Islands finest musicians. They perform some of the most celebrated songs in Rock n Roll history, with a focus on the music of John Fogerty and CCR, as well as music by Tony Joe White, Gerry Rafferty, Mark Knoffler and others.
The Poor boys are led by legendary guitarist Don Peterson, who has been a force on the western Canadian music scene since the 1970s.
Don is joined by multi-instrumentalist, Lee Worden, on bass guitar and vocals (recently back from Nashville, after spending many years as lead guitarist for Ian Tyson), Kelly Fawcett on guitar and vocals, Matthew Pease on drums and Chris Van Sickle on keyboards.
© 2022 Arts On View Society