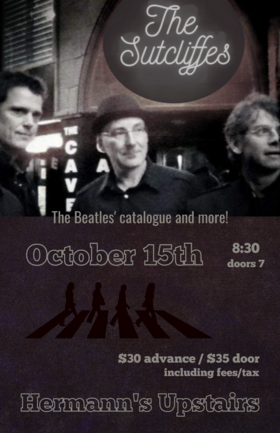 Sat. October 15th 2022 8:30 - 11:30 doors at 7:00 (No Minors)
$30 advance / $35 door including fees/tax
Online sales are closed now but tickets will still be available at the door.
A Beatles band with a slightly different take. Their focus is on the Beatles from Hamburg, to the Cavern, and the BBC studios- the songs they wrote, the songs they covered and the songs they loved. They play early period songs, with a nod to the more well-known tracks. They cover many of the Beatles seminal influences, from early rock and roll classics like Chuck Berry’s Memphis, to the slinky R&B of Anna and on to the country and rockabilly vein of I Got a Woman (their version of the Beatles doing Elvis’s cover of a Ray Charles song...).
When the Sutcliffes were invited to play The Liverpool Beatles Festival they realized the dream of every kid who ever listened to the Beatles. The annual event sees tens of thousands of visitors make the pilgrimage to listen to some of the greatest performers from around the world. The Sutcliffes were the first artists from B.C. to ever be invited and were there with over 50 other acts from Europe, Asia and North and South America.
© 2023 Arts On View Society