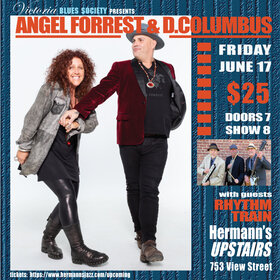 Fri. June 17th 8:00 doors at 7:00 (No Minors)
$25  Buy Tickets Online
>> Purchase In-Person Tickets
Angel Forrest is one of Canada’s most celebrated blues vocalists. She has won numerous Maple Blues Awards in multiple categories including Recording of the Year and Songwriter of the Year and has won Best Female Vocalist 8 times. She has been a finalist in the International Blues Challenge, giving her international recognition. In 2021, she was a Juno Nominee for Blues Album of the year. Her most recent album Angels 11, Volume 11 will be available at the show. Angel’s musical and life partner D. Columbus has been active in the music industry for over 30 years. He is a self-taught multi-instrumentalist who is a seasoned guitar player, bassist, backing vocalist, singer, live sound engineer and music producer. He has been involved in fourteen studio albums, earning recognition from the Maple Blues Awards and more. He has recently been gaining recognition as an individual artist with his recently released solo album. Together, they are a force to be reckoned with.
Opening the show are special guests Rhythm Train which features Jack Lavin, Jan Randall and Ross Hall. Each of these musicians have incredible credentials and history in the Canadian music scene.
This show features some of Canada’s finest musicians and will be a show not to be missed.
© 2022 Arts On View Society