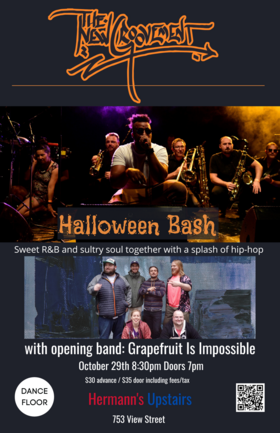 Sat. October 29th 2022 8:30 - 1:00 doors at 7:00 (No Minors)
$30 advance / $35 door including fees/tax
Online sales are closed now but tickets will still be available at the door.
For the last decade The New Groovement has been the funk, hip-hop party machine of Victoria, BC. Featuring a full horn section, congas, timbales, guitar, bass and drums - they'll get you out of your seat and onto the dance floor. With current frontman and emcee Shane Blaq bringing lyricism and a soulful swagger, they are committed to 10 more years of funk. To quote Ed the Sock, “this band should be bigger than it is, not like in roster but in popularity.”

The New Groovement has made their mark on BC’s music scene, having been nominated for Urban Artist of the Year at the Western Canadian Music Awards, winning Album of the Year at the Vancouver Island Music Awards, and opening for acclaimed acts such as Booker T. Jones, Five Alarm Funk and Busty and the Bass. They are found regularly wowing crowds at the region’s biggest festivals, and touring Western Canada. This summer they embarked on a tour of Northern BC to headline the Edge of the World Music Festival on Haida Gwaii. They are played on CBC and were previously featured as the Zone @ 91.3 (Victoria) Band of the Month. The band released their first full-length studio album, The Orange Album, in 2015 and their Tired of Waiting EP in 2018. Their current singles “The Wave” and "Grown Ass Woman" are available on all major music platforms, and more singles are on the way.

Grapefruit is Impossible is a six-piece band from Victoria, BC playing a fusion of original jazz and hip-hop music with technical instrumentation and uncontrollable enthusiasm. The band’s goal is to have as much fun as possible, and to create an open, unique live show that is impossible to resist. With fantastical songs like “Grandma’s House” and “Strategically Shaved Bears”, G.I.I. will happily show you how exciting and accessible their zesty jazzy-hip-hop music truly is.
© 2023 Arts On View Society